Queensland angler Malcolm Keag sent us this report on his recent battle with a 720 lb marlin aboard his Surtees 850 Game Fisher. Great work guys!

"I needed to take the 850 from Manly harbour where we keep the boat to Cabbage Tree Creek by 3.00 pm to get picked up by Northside Marine for the 100 hour service. I mentioned to my mate Dan that we should go via the shelf rather than straight there - only a 'slight detour'. Another mate was going to come but he pulled out due to other commitments. We left the boat harbour at 4.00 am and we were trolling the shelf by 6.30 am. We were trolling two stand up 80's with lures made by Dan. First fish up was a nice blue marlin. It hit the teaser and had a look at the port rigger but then headed off. The second fish up was another blue marlin. It smashed the port rigger. Dan fought it for 10 minutes then it spat the lure.

About 10.30 am the starboard rigger got smashed - we didn't see the bite - and Dan was back on the rod. It was all going to plan at that stage. We called it for a blue. It jumped early on and we knew it was big but the fish never got past the mono topshot for most of the time it was on. We got the double up a number of times but we couldn't get to the leader - being two up was a big disadvantage at this stage but meeting the Northside guys at the ramp at 3.00 pm was still looking ok.

The fight just kept going on and on. I got on the VHF and told Coastguard Redcliffe to push back our estimated time of return to 4.00 pm. After 4 hours the fish jumped a couple of times about 100 m out. We couldn't believe it still had that much energy.

Dan was doing an amazing job on the rod and with the fish changing direction there was plenty of boat manoeuvring to keep me on my toes. We tried every trick in the book to get the fish in to grab the leader but it wasn't playing the game. We drifted south west. Eventually we drifted into mobile phone range and we started getting calls - more than we could deal with sometimes. I called Bill Hull from Northside Marine and said we wouldn't be bringing the boat in as planned. Bill and Jason reckoned we were a bit soft.

I kept bringing water, Coke, Pringles etc to Dan. I couldn't believe he could keep doing what he was doing. I was tired enough just skippering.

I kept pushing our estimated time of return on the coastguard log back... 5 pm... 6 pm... 7 pm... 8 pm... 9 pm. We started off at the top of Moreton Island in several hundred meters of water. By the end we were half way down Stradbroke Island in 38 m of water.

It became obvious we were going to be fighting the fish well past sunset. We got a call from Dan's mates Birdy and Conor. They were heading out in their boat to meet us. An hour and half later they arrived at our location off Point Lookout. While we kept fighting the fish Conor leapt off their boat and swam over to us. He swam pretty quick!! What a relief to have a good decky on board.

The fish kept fighting, continually changing direction. There was no way it should have still be going. After well over an hour after Conor got on the boat at around 8 pm, he called out that the fish had died and come to the surface. We drove over to it and secured it. Sad to see the great fish like that but also a relief. We were all very tired. We then realised it was a black marlin not a blue. Very big for south east Queensland. Rather than just leave it we decided to tow it back in.

With no hope of the three of us being able to get the fish loaded onto the transom door Birdy leapt in and swam over. Again he swam very quickly. We manoeuvred the fish back to the port side transom door. Birdy rigged up some ropes to help pull the fish into the boat but it was too wide to get past the pectoral fins. Dan secured the tail to stop it hitting the prop.

Now it was time to get Birdy and Conor back to their boat Thunderbird which was obediently drifting south with us. It was dark and the NE swell was up. I drove up close to Thunderbird and Birdy managed to step onto the bow while Conor was back into the water for another quick swim.

Then we began the trip home. Having over 700 lb of marlin hanging over the port side stern in a fair sea in the dark isn't probably what the Surtees boys had in mind when they designed the 850. Displacement speed quartering into the NE swell was a bit rolly so Dan suggested we get on the plane. I bought the 350 HP Yamaha up to 3700 rpm and the boat sat happily on about 18-20 knots into a fair sea.

Next obstacle was the South Passage Bar but we got through ok with Thunderbird following us and then we were into Moreton Bay. In the calmer conditions we managed to get back into Manly by 11.30 pm.

At the pontoon at Manly we were met by Nathan with a set of scales and a group of guys eager to help us out. Boy did we need help by then. The fish was put onto Thunderbird's trailer and with a bit of Aussie ingenuity and climbing skills from one of the boys we hoisted fish from a tree. With the bill still slightly resting on the ground in scales settled at 327 kg - let's call it just over 720 lb.

We covered 245 km and the outboard run for 19.8 hours on the day. A big day and a big thanks to everyone who helped, from Coastguard Redcliffe to Birdy, Conor and Nathan and the guys that helped out at the ramp.

As I was driving Dan home at 2.00 am I said to him that there was about 10 things that happened on the day that would have been memorable in their own right but we managed to put them all together in one package." 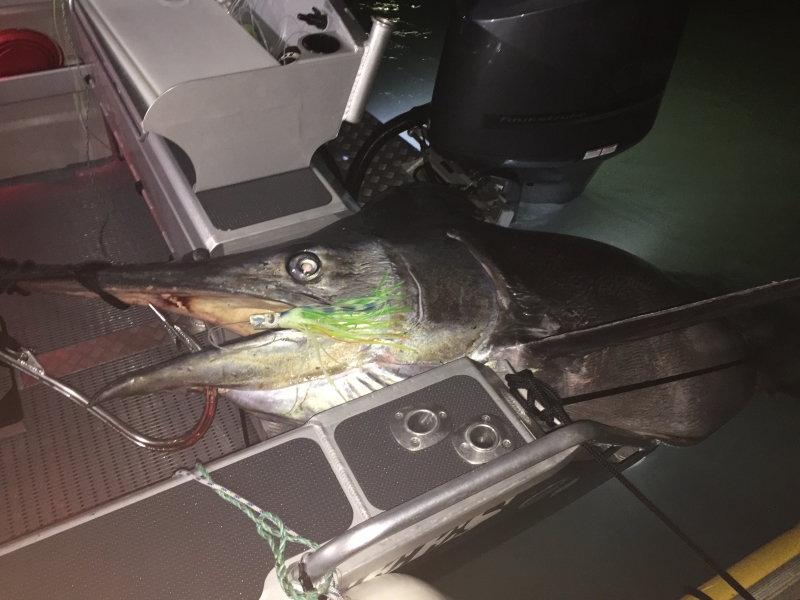 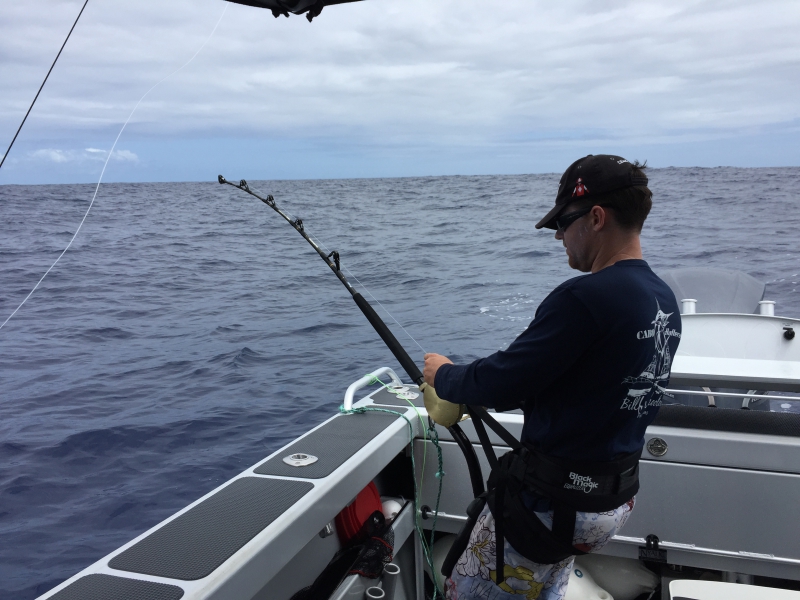